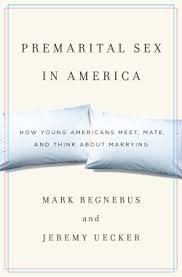 From the Introduction of the book, “Premarital Sex in America: How Americans Meet, Mate, and Think About Marrying.”

In December 2006, researchers from the Guttmacher Institute released a report about the historic and contemporary prevalence of premarital sex, and they received an avalanche of media attention for it. Their news: about 95 percent of the American public had their first experience of sexual intercourse before they got married. The report also suggested that this is nothing new–even most Americans born in the 1940s reported having sex before marriage. But having sex before you’re married doesn’t mean you had sex by age 18, or even age 25 (although opportunities for premarital sex are certainly increasing). This book is about the heteroesexual decisions and relationships of unmarried Americans between the ages of 18 and 23, and our best data estimate suggests about 84 percent of them have already had sex.

Ironically, we won’t actually use the term premarital sex very often. Not because the sexual relationships we will describe here aren’t actually premarital–they are–but because the term itself has changed meanings. Historically, it implied a sexual relationship between a couple who eventually got married. Most sexual relationships among contemporary young adults, however, no longer result in marriage. And an increasing share of American adults aren’t marrying at all. Yes, premarital sex has lost much of its association with marriage, at least marriage to a particular partner. It now tends to refer to any act of sexual intercourse that occurs prior to a person’s getting married. Whether it’s a person’s first sexual partner, an old boyfriend, a one-night stand, or someone’s eventual spouse, the “who” has become less important than the “when in the use of the term.

OK, just this first page of the introduction probably sounds like Planet Bizarro to those who rarely step out of Christendom, but the fact of the matter is that the notion and value of sexual integrity, purity and wholeness has gone by the wayside. And if you thought prime time shows like “Desperate Housewives” or “Sex in the City” were downright shameful, you have no idea what the emerging generation watches in shows like “Skins” which takes the casualness of sexual encounter in high school to a whole new, brazen level. There’s a difficulty in reconciling something that is as epic as marriage. I don’t know if I’m alone in that thought, but it’s like trying to prove that breathing cleaner air will increase your lifespan when there is always that exceptional smoker who lives to 110. The value of fidelity is difficult to prove; because you’re trying to prove a negative — you can be happier by abstaining from sex. How would you know? You can’t have a control group for yourself while you ponder sowing a wild oat or two.

So where does reconciliation begin within a culture of sexual permissiveness? I think we begin with relationship as the fundamental metric. Without judgment or condition, we must be able to make and sustain friendships with people whom we feel border on promiscuity. Luckily, we have a model for this in a certain rabbi named Yeshua. Incarnation precedes reconciliation — not simply tolerance or suppression of a gag reflex, where they know that we are coming off some high place to be with them, that we are just marginally their friends, but that we care deeply for them. Never forget that despite our notions of purity and wholeness for ourselves, it is still not by our righteousness that we stand before God. Even now. We are even now clothed with a righteousness that is not ours.